You are here:
DRIPPING SPRINGSEVENTSFAMILY FUN 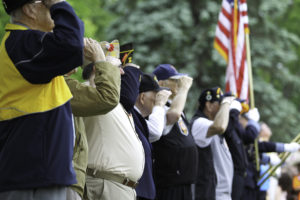 The U.S. observes Veterans Day on November 11 to honor people who have served in the American military. And Dripping Springs residents have the perfect place to go. And that’s the National Museum of the Pacific War in Fredericksburg, the only museum dedicated to World War II’s Pacific theater.

The museum’s collection contains 900 artifacts across almost 100 climate-controlled cases, 40 media installations, 15 macro-artifacts, and hundreds of photographs. Just two blocks away is the Pacific Combat Zone where reenactors demonstrate the uniforms, tactics, and weapons of the American and Japanese military.
The Story of Fleet Admiral Chester W. Nimitz
The museum is in the boyhood home of Fleet Admiral Chester W. Nimitz who served in the U.S. Pacific Fleet during WWII. The museum’s property includes the Admiral Nimitz Museum in the Nimitz hotel. Its exhibit tells his story beginning as a young boy as well as the story of the hotel.
Admiral Nimitz’s grandfather built the hotel in 1852. It gained the nickname Steamboat Hotel because of its ship’s bow front. The hotel featured a ballroom, smokehouse, bath-house, saloon, and brewery. Famous guests include U.S. President Rutherford B. Hayes, General Ulysses S. Grant, and General Robert E. Lee.
By 2025, the National Museum of the Pacific War will become a recognized international center for research on WWII’s Asiatic-Pacific Theater. It plans to offer virtual access to exhibits, collections, and educational programs.
National Museum of the Pacific War on Veterans Day
On Monday, November 11 at 11 am, the museum holds its annual Veterans Day Program to thank those who have served the country. Texas State Senator Dawn Buckingham will give the keynote and the Fredericksburg Chorale performs at the free event open to the public.
For more events, check out the National Museum of the Pacific War calendar. Looking for more things to do near Dripping Springs? Come back to this Caliterra website regularly. You can also connect with Caliterra on Facebook, Instagram, and Twitter.